The entire process from the beginning of development to the completion of the first product took a full 13 years.
The journey to the birth of the THINKY MIXER as told by the development leader

The entire process, from the beginning of development to the completion of the first product,
took a full 13 years.
The development leader talks about the journey before the release of the THINKY MIXER

My challenging spirit is inspired

After listening to my dentist talk about dentures or false teeth, I was prompted to develop the product. For dentures or false teeth, the accuracy of the first dental impression is extremely important as it determines its finish, he said. The substance called alginic acid has been used as a dental impression material up until today. Available in powder form, it is dissolved in water and used in paste form. When pressed onto the teeth, it hardens in two to three minutes. Because of its extremely short pot life (serviceable time), it has to be mixed as quickly as possible and without producing bubbles.

Right after the start of product development, I found that it was such a challenging task as it is said that “unless you can knead alginic acid, you would not be considered a full-fledged dental hygienist.” In those days, a specialized machine was available, but because there was not much difference from mixing manually, it did not appear to be used very frequently. If a customer says, “If your product can do this, you will be able to sell as many as you want,” I would most likely give it a try because I am a manufacturer. That is why I set out to develop it.

As I had no know-how on mixing or deaeration, I had to start from scratch. As the first step, I considered taking a conventional approach and tried a propeller style. However, it produced more bubbles than manual kneading. Cleaning after use was also such a hassle. Although I intended to use vacuum defoaming, its mechanism was so complicated that I gave up. To be honest, I was often lost in thought at that time.

Through repeated experiments, I came to realize that “the product should be OK if it can perform kneading without a propeller or a paddle, but it would be even better if it can mix and deaerate simultaneously.” The target was to knead alginic acid within 30 seconds, so if the two processes could be addressed concurrently, I thought that I would be able to cut down on time. What caught my eye was a centrifugal deaerator. When I put alginic acid that I mixed using a paddle into a centrifugal deaerator, it hardened with time but all the bubbles were gone nicely.

In other words, I thought that if I could mix alginic acid in the centrifugal deaerator, mixing and deaeration could be done simultaneously and quickly. This was the basis of my image of the THINKY MIXER. What came to my mind first was “a planetary gear.” I thought that if I applied rotational force to the container part of the centrifugal deaerator just as a planet revolves both on its own axis and around the sun, I would be able to mix it. I felt anxious but decided to give it my best shot. 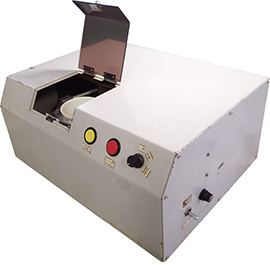 An example of a prototype

The biggest issue was the extreme gravitational force that was generated due to centrifugal force. To deaerate, an acceleration force of at least 200 G or so was needed, but this was about 30 times greater than that at the time of launching a space shuttle. In the case of a conventional centrifuge, the container is fixed so it can withstand strong gravitational force, but if it needs to be rotated, a drive part would be required.

A prototype in which a drive mechanism was built in broke down as soon as it started rotating, or parts broke and were thrown all around. Quite often, I found myself barely escaping serious injury. Although I asked several leading engineering firms to design one, every single company said, “We cannot do it,” after only talking about my idea, so I had no choice but to do this myself and with my colleagues.

It took about a year to arrive at a rough mechanism after the start of development, and another two years to solve the joint part that conveys an inclination angle and rotation on the part of the container, and come up with a prototype that can be evaluated in terms of concurrent mixing and deaeration. 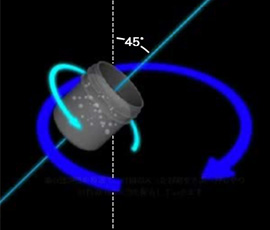 Illustration showing the principles
of rotation and revolution

The last struggle before its release into the market

I thought that this was it. As it turned out, however, there was no problem with the prototype if it ran for five to ten minutes, but after running for two to three hours, smoke came out from the rotating part, and the product broke down. The cause was abrasion at the joint part. The oil film coating of the bearing flew in all directions due to the strong centrifugal force. When it was disassembled, the bearing was completely dry as if it were washed. So, I came up with a structure that puts the bearing in a bowl, and sealed it with oil, for instance, and undertook a process of trial and error to the bitter end. In the final analysis, I did not use a joint for the THINKY MIXER but applied a V belt instead.

I managed to come out with a prototype and used it to mix epoxy resin and a hardening agent. The moment I opened the container, there was not a single bubble and it was completely transparent. I could see through the bottom of the container, which made me think that “I might have spilled it somewhere.”

After releasing the product into the market, I handled each and every complaint from customers and made improvements based on it, which have been handed down to the present generation of the THINKY MIXER. When 200 G is applied on 100 g of material, the drive part receives about 20 kg of weight directly. For it to withstand that weight and generate a practically acceptable centrifugal force, I struggled a lot. But now, I can boast that this is such a great product without any reservation. 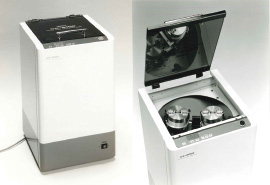