“Pulverization” (comminution, crushing, grinding) is the process of applying an external force to a (solid) material of a certain size to destroy it and reduce it into pieces that are smaller than the original size. Pulverization has long been done for many materials, including ore, glass, ceramics, grains, paints, and medicines.

The purpose of pulverization is roughly divided into (1) to (3) below, but recently, purposes (4) to (8) have been added. Pulverization is being used not only for reducing particle size but also as an operation for developing new materials. (*1)Various effects and outcomes are expected.

Next, let us look at the process of pulverization.
The application of an external force causes a particle to elastically deform and cracks occur at points where the stress limit of the particle is exceeded. It is thought that the particle is destroyed by the propagation of cracks, completing pulverization.(*2)

There are two types of particle destruction in the pulverization process, “surface grinding” and “volume grinding”.

The external force applied to particles can be roughly divided into four types, “compression”, “impact”, “shear”, and “friction”. The actual pulverization mechanism is complicated. Instead of a single type of external force, several types may act on a particle at the same time.(*3)。
In addition, the process is affected in a complicated way by the physical properties of the pulverized material, the pulverization environment, etc. Therefore, it is difficult to clearly explain the pulverization process. Below is a model of force acting on a solid, as proposed by Rumpf.(*5)。 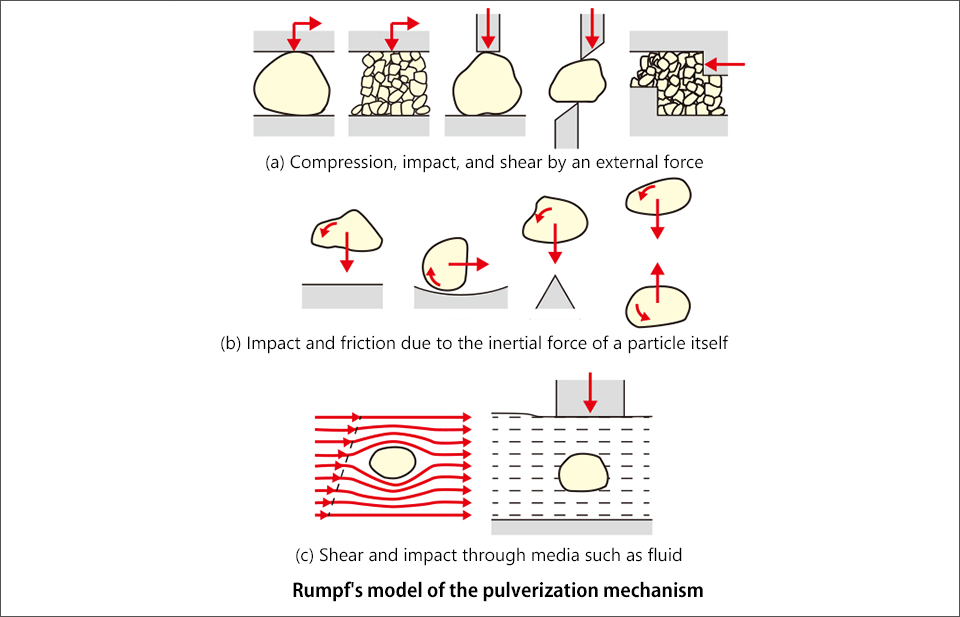 ＜Compression pulverization＞
Two working surfaces approach each other slowly, pressurize an object uniformly, and crush it. Large hard objects are reduced into small pieces. It is used for rough pulverization.

＜Impact (collision) pulverization＞
A high-speed impactor (such as a hammer or a ball) instantaneously impacts a solid object, or objects collide with each other at high speed to cause crushing. This process is used for pulverization into medium- and small-sized objects (10 cm or less).

＜Shear pulverization＞
An object is cut into small pieces by a wedge, such as a cutter. It is suitable for pulverizing fragile objects.

* References
(*1) Hiroshi Sakamoto: “Crushing and grinding”, Resources and Materials Vol. 113, No. 12, 899-903 (1985).
(*2) Introduction to Powder Engineering, 52-57, Association of Powder Process Industry and Engineering, Japan.
(*3) Yoshiteru Kanda: “Study on research and technological history of grinding”, Journal of the Association of Materials Engineering for Resources Vol. 9, No. 2, 87-110 (1996).
(*4) Toshio Inoue: “What contributes to the improvement of grinding efficiency?” Journal of the Society of Powder Technology Vol. 22, No. 6, 71-76 (1985).
(*5) BSI Institute website “Fertilization Engineering” – Grinding.
(*6) Tsutomu Nakayama: Bead mill for making ultrafine particles and nanoparticles, p23-28, p29, p34-35.
(*7) Powder Terms Pocket Book, Association of Powder Process Industry and Engineering, Japan.
What is the difference between “pulverization” and “crushing”?

Various words are used for “pulverization” and “crushing” in English, and their usage varies among the types of industry and people.
When referring to pulverization in a broad sense, “size reduction” is often used, and when it is used for transforming a solid into small pieces, “comminution” is often used. In a narrow sense “grinding” is used (also referred to as friction grinding in mining). “Grinding” refers to pulverization in the area of finer particle size (crushing of fine particles) and may be distinguished from crushing. Besides these, “milling”, etc. are also used. Thinky Corporation uses “pulverization”.
When saying “cracking into pieces”, “crushing” may be used. “Crushing” refers to pulverization in the region where the particle size of the crushed material is relatively large (the maximum particle size is 1 mm or more). There is no clear boundary between grinding in a narrow sense and crushing, and the distinction remains vague.