The National Institute of Advanced Industrial Science and Technology (AIST) is one of the largest research institutions in Japan, where comprehensive research and development are performed in a wide range of industrial technologies. The following describes an interview with Dr. Okada, who is conducting research on explosion at AIST. I heard interesting stories including topics on CNF.

1. First of all, I would like to ask about the research on explosion, your area of expertise. I heard that you have been investigating the cause of explosion accidents. What prompted you to engage in this research?

I majored in metallurgical engineering in the undergraduate course and nuclear engineering in the master’s and doctorate courses in university. The thesis advisor of my doctoral dissertation advised me to investigate the cause of ignition and explosion of radioactive waste. Therefore, I investigated the cause of the 1997 explosion incident at the Bituminization Demonstration Facility at the Tokai Works of the Power Reactor and Nuclear Fuel Development Corporation (currently, Japan Atomic Energy Agency, National Research and Development Agency).
At that time, there were several major incidents at nuclear facilities. At AIST, I also investigate the cause of explosion accidents at the request of private companies. It is also an important mission of AIST to provide the various data that will be used as the basis of the Explosives Control Act under the jurisdiction of the Ministry of Economy, Trade and Industry (METI).
In an explosion accident in a factory, a blast greater than expected was produced. The damage indicated that the actual blast had been larger than that estimated for the known amount of explosive materials. The results of experiments suggested the cause was the burning of the metal container and the release of the corresponding extra energy. On the basis of this, the policy that containers should also be taken into account has been included in the law.

That’s right. Explosion experiments up to the equivalent of 2.5 kg of explosives are possible in the explosion pit. The explosion accident I mentioned before involved more explosives. Basically, we make estimations based on experiments carried out on a small scale. Large-scale experiments are sometimes performed at external facilities.

3. What are the important factors in determining the cause of an explosion accident?

It is the ability to think ahead, I think. Like shogi, Japanese chess, I perform experiments by making predictions on the effects of changes in conditions.

4. You make hypotheses, don’t you?

That’s right. However, there are cases where my hypothesis does not work well. In general, no evidence is left after an explosion accident. Because substances causing the explosion are also likely to be decomposed, it is not clear what the actual reaction was. It is unknown whether hydrogen exploded or another substance exploded. Sometimes, no explosion occurs in experiments under various conditions, but explosion can be reproduced under a condition slightly different from others. In that case, we have to draw the conclusion that this will be the most probable cause even though it is not conclusive.

5. It must be hard to investigate the cause without any evidence.

Yes, it is. It is necessary to sharpen the senses and investigate the cause. As a research and development agency belonging to the Ministry of Economy, Trade and Industry, we are in a position to support private companies. Our role is to support those troubled by explosion accidents. Therefore, when an accident occurs, I prefer to suggest improvements instead of just stopping what they are doing, even if there is a risk of explosion.

6. That is encouraging. Explosion accidents seem to be increasing recently. Does this have anything to do with the problem of technology transfer?

I think it is one of the factors. There are various safety technologies not mentioned in the manual. Sometimes, after an experienced worker leaves, a remaining worker does something that should not be done without knowing it, causing an explosion. I think that there are many examples of accidents occurring as a result of technology not being properly transferred. In general, the risk increases at times of infrequent operation such as during cleaning when machines or plants are stopped or when they are restarted.
With the support of a Health and Labor Sciences Research Grant, I am also conducting research on “safety culture and laborer safety awareness” together with university professors. Research on occupational safety and health management is very active in the UK and other countries. Actually, the research on safety is quite in depth and extensive. This field is broadly distributed from the research on materials safety, which we are working on, to the research on risk assessment to impose top-down safety measures.

7. Are you not afraid of the explosions you are studying?

Basically, I perform experiments very carefully because of fear. There are all sorts of explosive substances. For example, the explosive called TNT may be scary for ordinary people, but it is actually very safe because it does not explode easily even if you hit it with a hammer. On the other hand, there are substances that can explode even if a mosquito lands on them. The most troublesome explosive is a highly hazardous substance with high sensitivity. A typical example is hydrogen azide, which emits highly toxic gas and is highly sensitive. It must be handled very carefully. Basically, if you understand the identity of the substance and handle it accordingly, it is not very frightening. In fact, 99% of explosive substances are not frightening. On the contrary, unknown explosive substances can be quite dangerous. In such a case, I deal with extremely small amounts or handle them under complete protection.

8. Is there a water tank for experiments?

There is an experimental facility for underwater explosions, which is used for precise measurement of the power of explosives. We sometimes make the underwater explosion tests public demonstrations for the purpose of letting people understand our research and safely experience with the power of explosions. Once you experience an explosion, you can understand that even a small amount of explosive is powerful. The demonstration is very carefully prepared so that detonation occurs properly and there are no accidents.

9. Now, you are researching the practical application of cellulose nanofibers by taking advantage of the knowledge of explosives.

Yes, I am. In fact, I am conducting basic research to make fireworks with no smoke. Artillery shells use smokeless gunpowder. Fireworks, on the other hand, use black powder, which produces smoke. At present, therefore, there is much smoke produced at a fireworks display. I want to make fireworks with high added value by removing the smoke.
Recently, at AIST, we have set the policy of “from goal-oriented basic research to bridging” and are putting efforts into research that will be useful in the society in the future. From such a perspective, I came up with the possibility of making the fireworks that will be launched at theme parks etc. almost smokeless.
Nitrocellulose (NC) is the raw material for gunpowder and is also used in paints and pharmaceuticals. As the gunpowder for launching fireworks, however, its performance is inevitably low, and it currently remains unusable. Therefore, I thought of making gunpowder with cellulose nanofibers (CNF), which is expected to improve the burning speed. I am working on synthesizing nitrocellulose nanofibers (NCNF) by nitrating (nitric acid esterification) CNF. I became motivated to do this research when I was temporarily sent to the planning office to learn personnel assignment, planning, and management three years ago.
At AIST, researchers are recommended to experience such a position for a year and are given the opportunity to be in charge of research planning, including, for example, personnel and budget movements. As the chief of planning for the environmental energy field, I happened to be in charge of the group at AIST Chugoku (Hiroshima) headed by Dr. Takashi Endo, who is one of the world’s top experts on CNF. I asked him about researchers who might be working on making explosives with CNF and got the answer “none”. Therefore, I decided to try it as an undeveloped research subject.
THINKY MIXER ARE-310 is used for nitrifying CNF with mixed acid (mixed solution of sulfuric acid and nitric acid). Because CNF containing mixed acid is in a gel form, the mixing is difficult, but it is possible with this mixer. 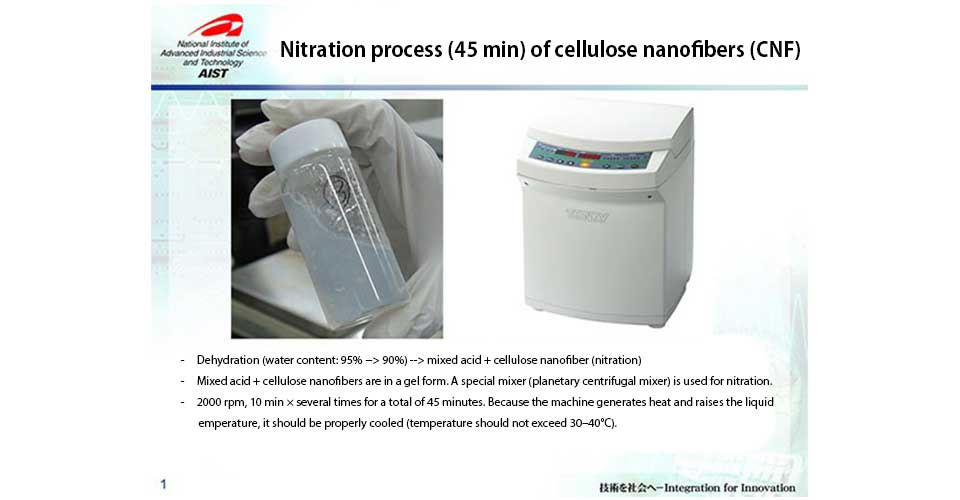 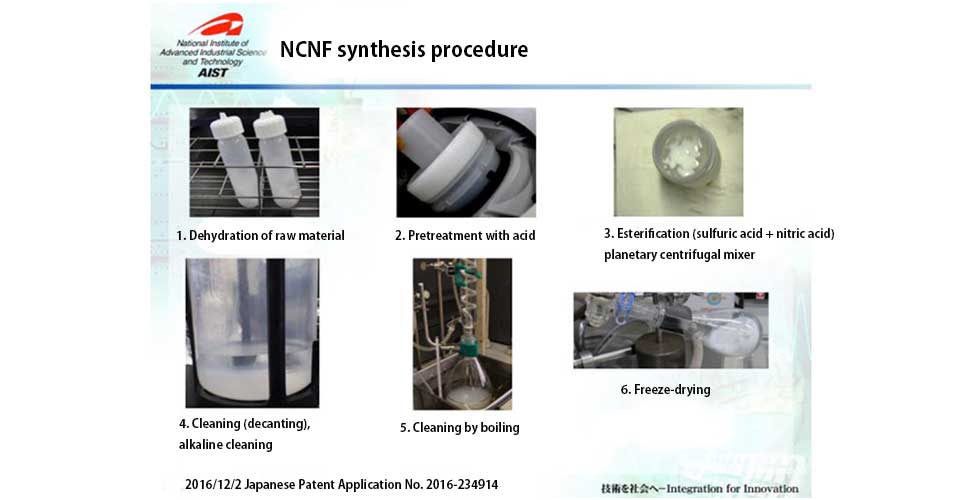 Because nitrocellulose nanofiber (NCNF) has a large specific surface area, the burning rate is about three times that of nitrocellulose (NC). Nitrocellulose has poor thermal stability. A huge explosion accident in Nanjing two years ago is said to be due to spontaneous ignition of nitrocellulose. Thus, I was afraid that the thermal stability might be affected by thinning of the fiber. However, the experimental results show that its thermal stability remains close to that of nitrocellulose.
The skyrocket firework is contained in a paper ball (ball skin). When it is launched, the ball skin opens in the sky. After that, the paper falls to the ground, and therefore should be collected as garbage the next day. The amount of this paper is actually considerable. I am thinking of making burning-out-type ball skins using NCNF, which would be suitable for theme parks etc.

The patent application has already been submitted. Next, I am planning to cooperate with private companies to make actual gunpowder. The road is very hard, but I hope it will take shape in the future.